Taking an electric bike with you on a trip is always a great idea. You can plan e-bike riding adventures with your friends and explore different cities while you ride your e-bike through the streets.

While there are multiple ways to transport an electric bike, mounting it on bike racks is one of the most common methods most e-bike users use. 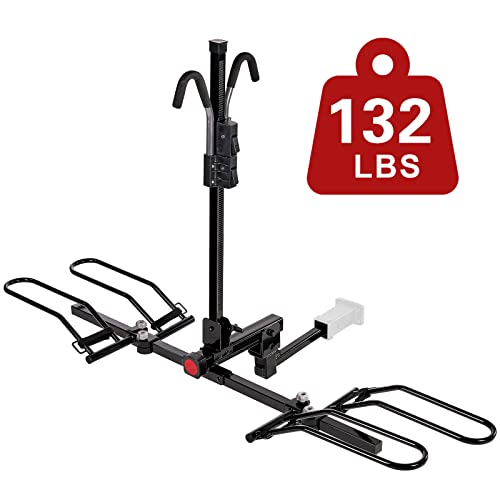 While the process of mounting an electric bike on a bike rack is fairly easy, it does expose the electric bike to a couple of different threats and damaging situations.

Can You Put an Electric Bike on a Bike Rack?

It is a common practice observed in countries where biking culture and electric bikes are extremely popular, such as the USA, China, Japan, etc.

Electric bike enthusiasts can simply install roof or trunk bike racks on their cars, mount their electric bikes, and begin the adventure.

However, according to e-bike market analysts and frequent e-bike users, transporting an electric bike using bike racks is not always the wisest idea.

According to these people, mounting an electric bike on a bike rack exposes it to multiple threats while also affecting the fuel efficiency and drive of the vehicle transporting the e-bike.

Hence, it is vital to consider key points and factors before transporting an electric bike on bike racks. Some such factors are as follows: 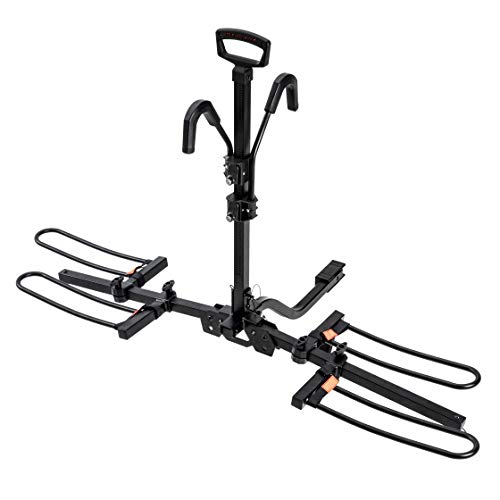 Moreover, this article also sheds light on other options you can use to transport an electric bike if using a bike rack seems too risky.

What Are the Potential Risks Associated with Transporting an Electric Bike Using a Bike Rack?

Taking an electric bike along on an adventure or trip is always a great idea. You can take in the sights on your bike, and you won’t get tired as a result of having to pedal too much.

You can ride around new cities and towns, explore new roads and cultures, and make the best of your trip without paying for expensive public transportation.

However, this is only possible if you are successfully able to transport your electric bike along without damaging it on the way.

Usually, it is hard to keep an electric bike from sustaining any form of damage when they are being transported on bike racks.

Some potential risks associated with transporting an electric bike using bike racks are as follows:

Electric bikes are expensive pieces of equipment that have been one of the most popular purchases across the globe over the last decade.

Although some countries have thousands of e-bikes on their roads, some regions of the world still see electric bikes as a rare luxury.

Hence, there is no denying that an electric bike is an attractive target for thieves. Regardless of what kind of electric bike a person steals, they can always make a reasonable sum of money by reselling it. 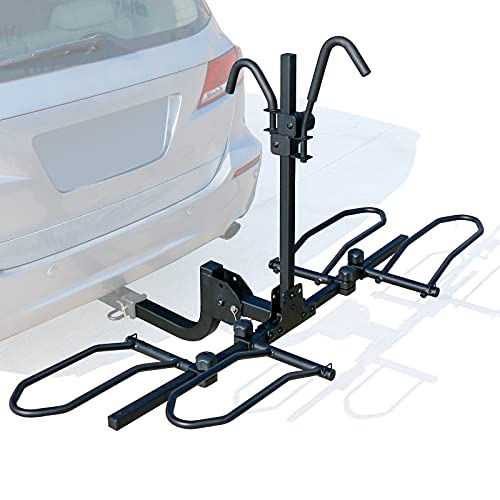 When an electric bike is tied to a roof or trunk rack, it has minimal protection and is exposed to all kinds of people.

When you might have to stop at a service station during your trip, a thief can quickly dismount your e-bike from the rack and steal it.

Read Can you Pedal an Electric Bike Without the Battery?

The battery of an electric bike is one of its most expensive components. Without the electric battery, the eBike is nothing more than a regular bike that the rider will have to pedal.

Good quality electric bike batteries have a great resale value, making them a primary target for theft. Moreover, stealing an e-bike’s battery is much easier than stealing the entire e-bike.

This is why incidences of electric bike battery theft are extremely common globally.

When an electric bike is mounted onto a vehicle’s bike racks, a passerby can easily remove the battery and steal it without being noticed at all.

This usually happens when other fast-moving vehicles drive over pebbles or small stones. If the stone flies off and hits the electric bike, it can damage its frame, break its lights, or even puncture its electric battery and tires. 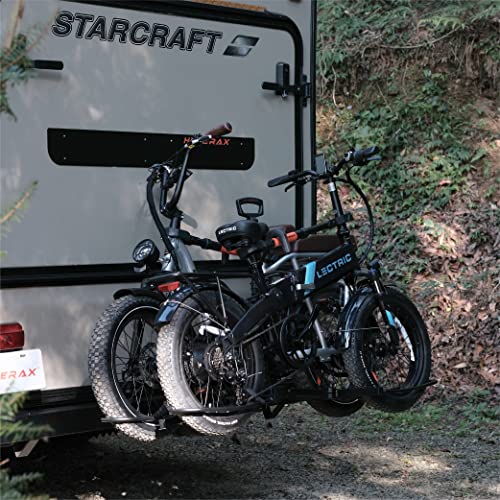 Poorly Tied Electric Bikes Can Damage Other Cars on the Road

Transporting electric bikes on bike racks does not only put the e-bike’s safety at risk but also creates a potential hazard for other vehicles on the road.

Let’s take the example of an electric bike that’s poorly tied on a roof rack. In this case, it can fall off the roof, seriously damage another vehicle on the road, or severely injure nearby pedestrians.

Even if the electric bike does not fall on another person or a vehicle, the crash will be enough to severely damage the bike frame and break many of its components.

Read Do You Need Insurance for an Electric Bike?

Many people prefer using trunk racks instead of roof racks to transport their electric bikes, especially when the roofs of their vehicles are not equipped to carry excessive weight.

While trunk racks make mounting and dismounting an electric bike much easier, they can negatively affect the driver’s visibility through the vehicle’s rear-view mirror.

This can impair the driver’s judgment, and while it’s not likely to cause a crash, it could result in some difficult situations for the driver..

Simple Accidents Can Cause Major Damage to Electric Bikes

If an electric bike is tied to the trunk rack of a vehicle, and another vehicle even slightly hits it from behind, the electric bike will sustain a lot of damage.

Loss of Aerodynamics will Affect the Transporting Vehicle’s Fuel Efficiency

This phenomenon is called the aerodynamic drag, which is exactly why aircraft are designed the way they are.

As a result, more fuel will have to be combusted to travel the same distance. Moreover, the fuel efficiency will decrease further if the driver attempts to increase their vehicle’s speed.

Read How Do I Pick an Electric Bike Conversion Kit?

Not all cars or jeeps are designed to carry a heavy weight on their roofs. Since electric bikes are significantly heavier than traditional bikes, mounting them on weak car roofs can be dangerous. 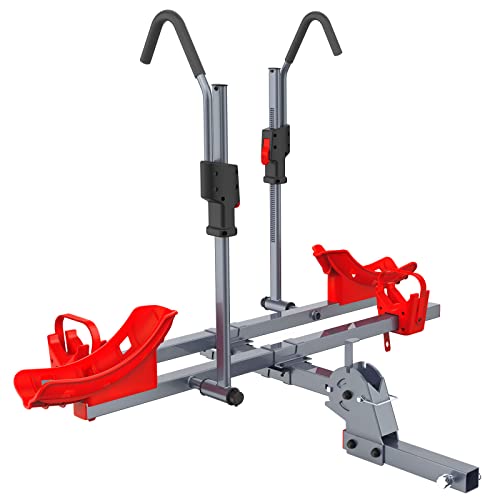 Before you proceed with transporting an electric bike using your vehicle’s bike rack, you need to consider the following to prevent potential problems from occurring:

The Total Weight of Your Electric Bike

Electric bikes are significantly heavier and bulkier than all other traditional bikes. This is because electric bikes are designed to have steel bodies to remain sturdy and strong to handle the speeds they travel at.

The table below lists some common electric bikes and their respective weights.

If you have an electric bike as heavy as an Audi, Gazelle, or Quiet Kat e-bike, you probably cannot mount it on every other vehicle’s roof.

To transport such a heavy electric bike, you either need to load the e-bike inside the car or transport it by bus or train.

However, if you have a lightweight Brompton Electric foldable e-bike, you need not worry about mounting it on any vehicle.

Read Can You Charge an Electric Bike with Solar Panels?

The Location of Your Electric Bike’s Battery

Some electric bikes have built-in batteries installed inside the e-bike’s crossbar. However, if the battery is designed to remain external, it is exposed to the risk of being stolen.

You can either load the entire electric bike inside your car or just remove its battery and keep it with you. 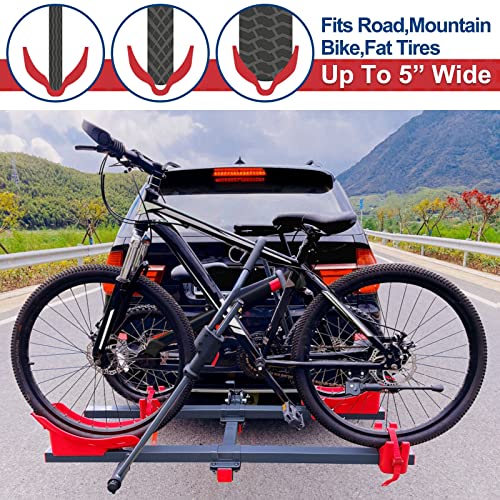 The Type of Electric Bike You Need to Transport

For instance, a teenager can find a sleek and lightweight foldable electric bike, while an overweight rider can find one specially designed for heavy riders.

At times the clips and rods of low-quality bike racks break when super heavy bikes are loaded on them. This can be dangerous for the e-bike and other vehicles on the road.

Moreover, some electric bikes have a pointy and elongated frame that can make securing them to the racks much more difficult.

How Valuable or Expensive an Electric Bike Is

If you are transporting an electric bike that is too expensive, especially when traveling through an area where e-bikes are seen as a rare luxury, mounting it on bike racks is perhaps not the best idea.

If such an e-bike is so open to the public, it will be hard to keep it from getting stolen. Instead, you should have it loaded inside your car or transported in a delivery truck.

The Type and Limitations of the Transporting Vehicle

Not all vehicles are designed to carry heavy loads on their roofs. If you have a small sedan or an old jeep, the only option is to load up the electric bike inside the car.

Moreover, it would help if you visited a car expert to ensure whether your vehicle’s roof will easily carry the weight of a heavy electric bike throughout the journey or not.

Read How Much Does It Cost to Rent An Electric Bike In the United States?

Other Ways to Transport an Electric Bike

You can still transport your electric bike even if you have an electric bike that is too large or heavy or you do not have a vehicle designed to carry excessive loads.

Some other ways to transport an electric bike are as follows:

Anyone with an electric bike knows the pleasure and relaxation that come from strolling around on it around town. This is why people insist on taking it along when going on a trip.

However, if you have absolutely no way to take your electric bike along, you can always rent one for the trip when visiting a new city or country.