Hybrid bikes, electric bikes, and hybrid electric bikes are becoming increasingly popular worldwide especially in the United States. Compared to regular bicycles, they can make long and difficult commutes easier and more comfortable. This article is specifically for people wanting to learn more about “hybrid electric bikes” and riding enthusiasts looking to enjoy the next great innovation in the industry.

What Is a Hybrid Electric Bike? 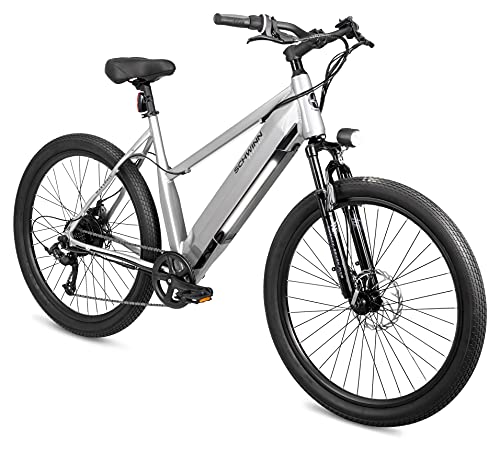 Hybrid e-bikes are not much different from “hybrid bikes” in terms of design. The only real “change” is the addition of a battery and motor.

There is, however, no single definition of an electric bike (e-bike). The term “hybrid” is used to imply a few different meanings.

The most common description is “a cross between an electric road bike and an electric mountain bike.”

You can think of a hybrid e-bike as a leisure bike as it comes with the tires of a road e-bicycle and the handlebars of an electric mountain bike.

These two-wheelers are perfect for riding through urban areas and going on cross-town riding adventures. It’s why they’re gaining popularity among commuters living in such places.

Read How Much Does an Electric Bike Battery Cost?

There are variations between the hybrid-electric bike versions released by different manufacturers.

For example, like hybrid bicycles, there are hybrid e-cycle models for mountain biking enthusiasts. There are also options for those interested in light trekking.

So, as mentioned before, the word “hybrid” denotes variation. And a hybrid electric bike is usually a combination of more than one e-bicycle feature.

Compared to an ordinary bicycle, an e-bike or hybrid e-bike has a battery-powered motor. It helps make your ride efficient, comfortable, and smooth.

There’s a digital display to help you change “motor input level” as you ride along. These are normally known as “assistance levels.”

Remember that you have to continue pedaling an electric bike or hybrid e-bike. The motor assistance levels are there to increase speed/thrust and propel you along.

An off-roader is any hybrid electric bike that can withstand riding through rough terrain. In that sense, “off-roader” is a broad term.

You can consider an electric mountain bike or a hybrid e-cycle as an off-roader. As long as they respond well to some light trekking through relatively hard terrain.

Moreover, any track that deviates from the smooth and paved city roads/streets is an “off-road path.” Examples include dirt tracks, park lanes, towpaths, etc. All of these can be handled by off-roader hybrid electric bikes.

However, the reverse is true as well. Most off-roader e-bicycles perform well on metallic city roads as well as interstates. And since these two-wheelers are designed for durability, you can expect relatively higher prices. 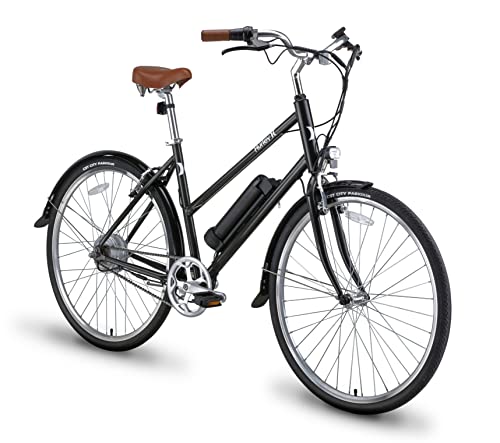 These are the most well-known types of hybrid e-bikes. A combination of commuter e-cycles and city e-bikes, they are designed for comfort and convenience. To that end, the handlebars are not the thickest while the wheels are smoother.

Furthermore, many urban bike models have fairly high speeds. This makes them perfect for cruising through dense traffic and crowded city bike lanes.

Even with the emphasis on comfort, commuter bikes are efficient, light, and surprisingly durable. When needed, they can also carry considerable weight.

The forks on hybrid electric bikes are almost always rigid. Other than that, lights, racks, and mudguards are all a part of the frame. And thanks to the electric motor, you can put public transport on the backburner. Perhaps even your car can be surplus to requirements for relatively shorter trips.

Since they can carry load, a bit of luggage won’t be a problem either. This can include a couple of bags, a rack, a child’s seat, etc.

Hybrid electric bikes of the urban/commuter variety are also perfect for “commuting” to work. You won’t have to deal with endless rush hour traffic jams when traveling on a hybrid e-bike.

Also, this is your kind of hybrid electric bike if:

This one would give you the best of both worlds.

You can use leisure bikes for short recreational trips or a ride around the neighborhood. They’re also a convenient mode of transport for a quick grocery run.

The same goes for a bit of light off-roading during a holiday. In fact, some recreational hybrid e-bike models might be as versatile as their off-roading counterparts.

Moreover, do you regularly take camping trips to unwind? Perhaps spending time around lakes and natural reserves is your way of recharging those batteries?

In both cases, a recreational hybrid e-bike is exactly the kind of two-wheeler you’re looking for.

Read Can you take an Electric Bike on Eurostar?

Hybrid e-bike forks are always rigid and the tires are usually semi-slick. The riding position also tends to be more relaxed than conventional bicycles.

There are, however, a few different varieties of frames.

Cycling has become accessible to more people thanks to electric and hybrid electric bikes. Those who have difficulty mounting a conventional bicycle can easily use a step-thru hybrid e-bike.

This one doesn’t require the rider to lift their leg over a waist-high top bar. As always, rider convenience is prioritized by manufacturers of these bicycles.

Slopping top tube e-bikes are known to be “female-friendly” bicycles. This particular aspect stands out because they are often advertised this way. Also, you’ll find women’s specific components on a slopping top tube hybrid e-bike.

The battery is usually on a rack near the back. This is done deliberately so the stand-over height is not affected in any way.

The straight top hybrid e-bike is made for taller riders. These frames are also perfect for those who want a sportier ride.

Also, other components don’t need to be hardened. The straight tube takes care of durability while the natural frame design adds the required rigidity. In other words, these frames are made for a smooth ride without compromising on bike stiffness. 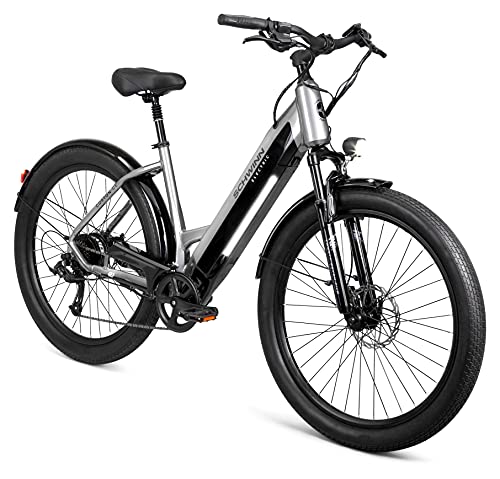 Read How Far Can You Go On an Electric Bike?

You stand to gain in multiple ways with a hybrid electric bike.

Support for All Riders

A hybrid electric bike can accommodate you easily regardless of age. You just have to be “old enough” to ride a standard bicycle.

This should make your decision-making easier. Should you have difficulty selecting the right e-bike, pick a hybrid. It can support all kinds of riders.

Hybrid electric bikes can perform similar to multiple types of e-bicycles. They perform well on paved roads as well as rough off-road terrain. In other words, you can enjoy a super-smooth ride on paved and carpeted roads.

Things aren’t much different when it comes to unpaved off-road paths as well. You can expect a fairly comfortable ride through dirt tracks and mountainous terrain.

Hence, it’s the perfect marriage between a commuter e-cycle and a city e-bike. A lot of it has to do with the all-terrain tires of hybrid electric bikes.

Hybrid electric bikes are attractively priced and offer great value for money. This is especially true for seasoned riders.

With a hybrid, they don’t have to buy multiple models for specific riding purposes. And this ends up saving a considerable amount of money.

Moreover, you might not want to limit yourself to just one kind of e-bike. Here again, a hybrid electric bike is a great option.

In addition, you might consider electric bikes to be beyond your price range. To that end, hybrids can provide multiple options.

Their designs and setups are often a combination of multiple e-bikes’ features. So, hybrid electric bikes are cost-effective options in this regard.

Hybrid electric bikes can fulfill more than one purpose for riders. This is where standard e-bicycles are generally lacking.

There’s a misconception that hybrid e-bikes are a compromise. They tend to “borrow” features from different full-fledged electric bike models.

However, this notion isn’t exactly true. Hybrid electric bikes are normally meant to be all-terrain two-wheelers. The same can’t be said of most “specialist” electric bikes.

For instance, if you want a more comfortable ride, go for curved handlebars. However, there’s a difference.

Doing so means you’re leaning towards a computer-specific electric bicycle.

Further customization can bring you the benefits of other e-bike features as well. Examples include bigger tires, stronger motor, battery, etc. 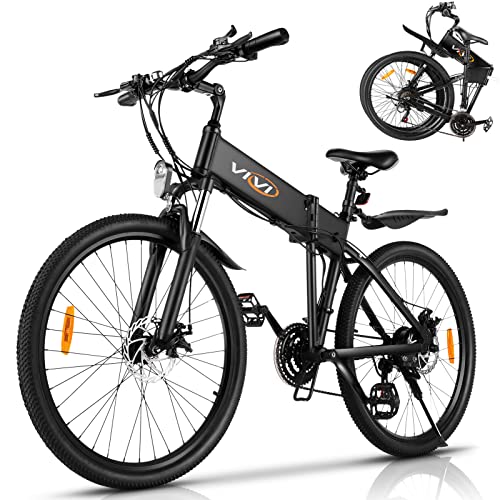 Read How To Use Gears On An Electric Bike

In terms of motor positioning, hybrid electric bikes are divided into the following groups.

Always remember to consider motor positioning when buying a hybrid e-bike. This can affect everything from ease of transport to how smooth the ride is.

In general, bicycles with mid-hub motors are the most expensive. However, the ride is much smoother too! So, if your budget allows it, go for a hybrid electric bike with a mid-hub motor.

Of course, individual needs are different. And it would help if you took test rides to decide the right motor position.

The following section contains the pros and cons of each type. These may help you make the right choice.

Fixed on the front wheel hub, these are common for touring e-bikes and folding bicycles. Below are some of their advantages and disadvantages.

The expensive mid-hub-motored hybrid e-bikes come with significant advantages and a couple of disadvantages. They’re also known as mid-engine motors.

As the name goes, these are placed on the rear wheel. The table below lists the pros and cons of this motor positioning.

Try to remain within your budget when purchasing a hybrid electric bike. Yes, splashing the cash on a more expensive and likable model feels great. However, it’s better not to get carried away.

You’ll find plenty of great models within your budget. All of them are likely to have the features you require. That being said, cutting corners won’t help either. Hybrid electric bikes tend to become the main bicycles for many novice and experienced riders.

This is because of their inherent versatility. So, in terms of your spending limit, try to find a middle ground. That should be enough to find the perfect two-wheeler for your needs.